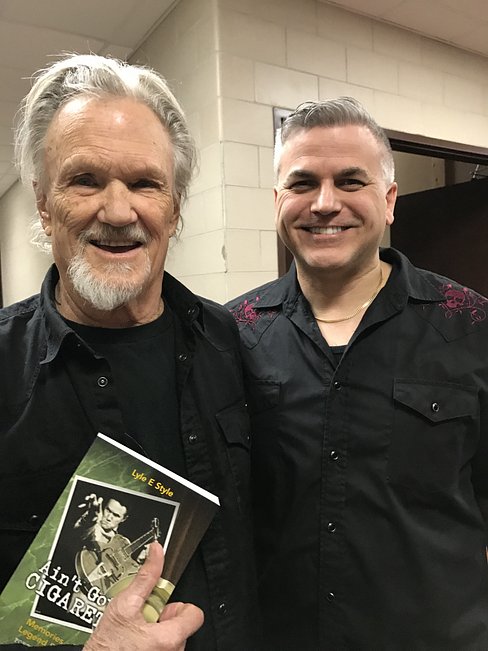 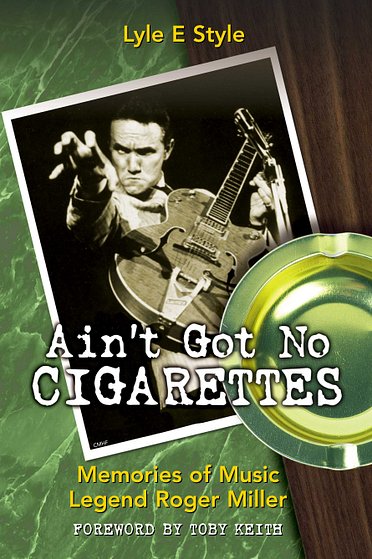 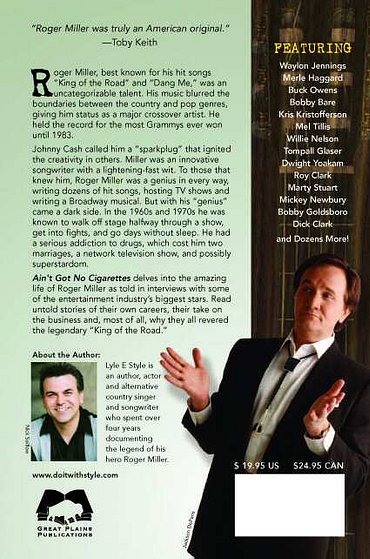 Ain't Got No Cigarettes
Memories of Music Legend
Roger Miller

If you would like the book personalized, please email mrestyle@shaw.ca with details on who it should be made out to. If Lyle is still alive, he will sign it for you.

Please note, this is coming from Canada where shipping is not only amongst the most expensive on the planet Earth, but also the slowest. Rest assure, if you bought the book, it is on its way (you will get an email stating it has been shipped). It normally takes two weeks for it to arrive, sometimes longer depending where you are in North America and how slow things go at Customs. If you are outside North America, shipping can take 6-8 weeks on average.

Thanks for your support - we hope you love the book!

"Singer/Songwriter Lyle E Style has put together just the right type of book to celebrate and remember Roger Miller. Rather than churn out the standard biography, Style's work lets the people who really knew, admired and loved him, tell their stories. The result is a book that's sometimes hilarious, sometimes troubling and sometimes poignant, one that gives readers far more detail and insight into the Miller personality than any academic chronicle. As distinctive as he was versatile and unusual, Roger Miller's charm and skill is wonderfully outlined in this valuable account."
~ Ron Wynn, American Songwriter Magazine

"In this collection of Q. and A.'s with dozens of illustrious country artists and fixtures of the Nashville scene, [Lyle E Style] ostensibly recounts the life of the musician and raconteur Roger Miller, of "King of the Road" and "Dang Me" fame, who died of cancer in 1992. But through a quirk of deliberate or accidental genius, what Style has actually assembled is a living document of country music in its hootin', hollerin' outlaw heyday."
- The New York Times

Featuring nearly one hundred candid interviews and quotes by:

Featuring some of the last interviews ever given by: Waylon Jennings, Sheb Wooley, Mickey Newbury, Merle Kilgore & Captain Midnight

Over 300 pages of amazing stories on Roger Miller including:

You are purchasing your book from a trusted high-rated eBay seller (ID: mrestyle). Packages are usually mailed out within two business days. You will be notified via email once book is shipped.

As a service to customers outside of Canada, I will mark "Gift" and a lower value on the package, and include no packing receipt to avoid possible cross-border fees/taxes (this will speed up shipping as well). If you want the full value claimed on the package, please let me know in advance.

Upon request, books can be signed by Author FREE of charge. Please inform what name you would like it made out to. For any questions regarding your purchase of books, comments or if you have any Roger Miller stories, one-liners, photos or rarities you'd like to share, please contact Lyle at: mrestyle@shaw.ca

Comments about the book:

"Lyle, thank you very much for AIN'T GOT NO CIGARETTES! What a perfect title. What an honor to be a part of the book! I was certain you would present a good, honest study of my friend, but ... honestly ... the pages are even better than I expected.

What makes the book most enjoyable is your very well constructed atmosphere while interviewing the various "artists", "songwriters", "producers", etc. What an enjoyable trip! I love the input of such diversified individuals as Sheb Wooley and Tompall Glaser. The obvious feuding attitude of Waylon toward Tompall, and the retaliatory thoughts of Tompall toward Waylon, really brought on some laughs!

Best to you, my friend! AIN'T GOT NO CIGARETTES is a winner all the way!"

"Dear Mr. Style:
I received your book on Monday and I just finished it this evening. You did an amazing job, sir. You could have "googled" Roger Miller and simply put together a compilation of articles and stories that were already written .But you didn't. You chose to tell the man's story through an oral history. I really liked that. A few things about the man did surprise me, e.g., his drug abuse problem and his history of impulsive behavior. Ah, the genius and the madness.

I am so happy I bought the book. Great job. I am envious that you were able to hook up with some real legends in putting this together. I don't believe that we will ever again see the likes of this kind of talent in the music business. Ever."

"Lyle...The Book is great!!!!! You have put together a wonderful tribute book, my friend and you should be really proud"

From Laurie Joulie, head writer of www.takecountryback.com and Take Country Back Magazine:

"I got the best book I've read in a long time in the mail this week -- Ain't Got No Cigarettes is a wonderful collection of interviews and memories about the life and music of Roger Miller. It's amazing - author Lyle E Style interviewed everyone from Merle, Waylon, Kris, Tompall, Dwight and many many many more!! 300+ pages!!! I am so impressed with it. I love the layout as well -- you can read it straight through or one interview at a time...

"There are two things that characterize this book over everything else. One is Mr. Style's truly excellent, well, style, as he draws these memories out of some of the most famous and possibly intimidating people in Nashville and across the country; and secondly, Roger Miller was not only a remarkable genius, he had more people crazy about him than probably anyone else in the world."

A solid collection of recollections on the life of Roger Miller by those who knew him best.

Filled with wonderful anecdotes, jokes, as well as heartbreakingly honest and open stories.

"The main thing I come away from in reading this book is that Roger Miller was pretty much universally loved by everyone who came in contact with him. Even those who just met him were charmed by him, or impressed by his intellect, or amused by his wit. The other thing is that it must be a universal truth that genius cannot be boxed in or pushed; invariably, it seems from every story in this book, every time Roger was doing very well it was when he was left on his own to record or film or write the way he wanted to. Any time some producer or executive put the strings on him, he failed spectacularly.

I laughed out loud several times reading this book; I felt a lump in my throat many more times. Here was a guy that absolutely no one disliked, and everyone had such wonderful things to say about him I wished I'd gotten the chance to meet him myself. He was funny, he was articulate, he was brilliant. He wrote songs like "When Two Worlds Collide" and "Husbands and Wives." He voiced a cartoon rooster for Disney so children from my generation and beyond will always know his unique voice. He made us laugh. His music still appears on TV in shows like "The Simpsons" or in commercials (and I think Roger himself would laugh at the use of "Chug-A-Lug" to sell milk). Everyone, and I mean everyone, loved him.

Roger Miller passed away far too young, at the age of 56, in October of 1992, of cancer. He left a gigantic void in country music and in the hearts of a lot of people.